Written for Mondays Finish the Story Challenge. This is a flash fiction challenge where we are provided with a new photo each week, and the first sentence of a story.Your challenge is to finish the story using 100-150 words, not including the sentence provided. For other interesting takes on this challenge just click on the blue frog at the end of this post.

Finish the story begins with: “They finally made their escape.”

They finally made their escape.

They had stalked their prey for the last 4 hours. Their targets were doing everything possible to make their mission a success. They were cooking fish for starters. The other food containers were all uncovered. They were cooking in a camouflaged area. All the better to sneak up on them and attack.

They attacked in unison. Two of their targets, the older ones, started to run. Stupid idea. Didn’t they understand that you simple can’t outrun a bear. The other two, who were but small children, stood their ground.

Eating until they were full the bears they decided to have some more fun. Their victims had left their car behind. Both John and Linda, the two older bears decided to go for a little joy ride.

As they left, Wanda and William, their two cubs, waved goodbye. 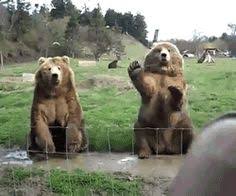 14 thoughts on “Close Encounters Of the 4th Kind”